With this barley risotto, I offer you another creative way to include more fiber-rish whole grains into your nutrition. It took me many years before I published this first clean eating recipe with this amazing whole grain on leanjumpstart.com. 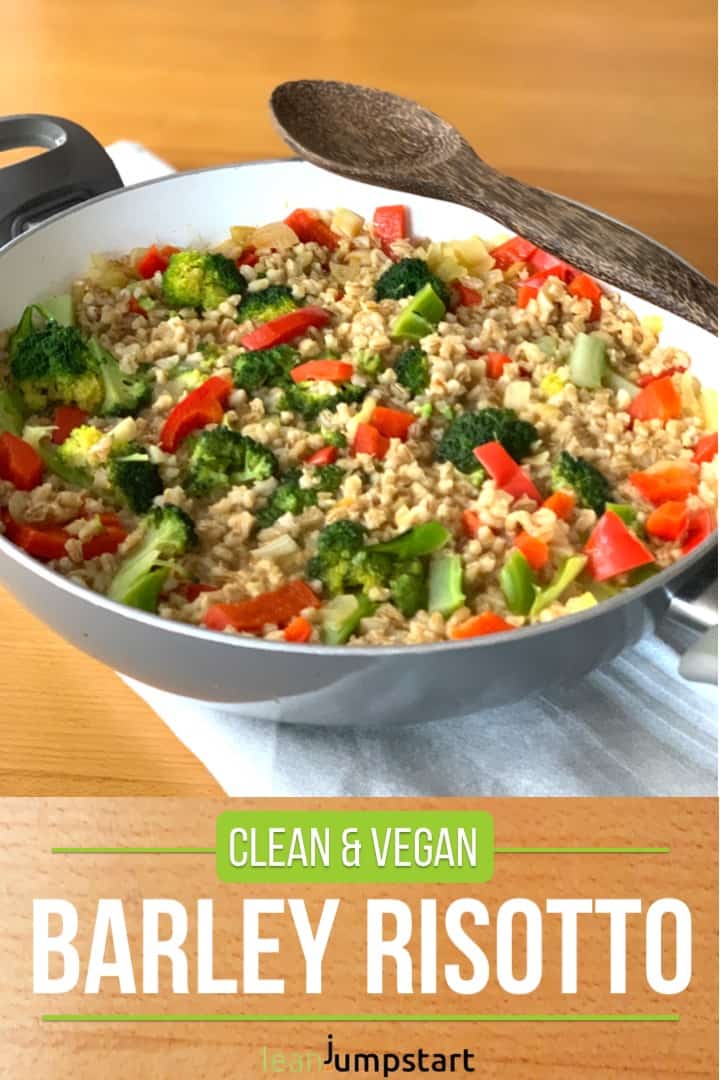 As often, you won't get only the recipe but I've also included some fascinating background information regarding barley's health benefits at the end of this blog post.

It' s not that we don't love barley, but the fact is that there are many other grains around that are just quicker to prepare. Think of bulgur that can be ready to eat in 15 minutes or quinoa or millet, both pseudo grains are cooked in under 20 minutes.

How to cook it?

Whole grain barley is different and you have to simmer it for up to 90 minutes! in sufficient (1:3) broth or salted water, before you can serve it. Don't run away yet…especially if high cholesterol levels are an issue for you.

Some types need only 45-60 minutes. Soaking the cereal the night before can also reduce cooking time.

I think you can understand, that the long cooking time doesn't give this grain the best preconditions to play a dominating role in my simplified clean eating kitchen. 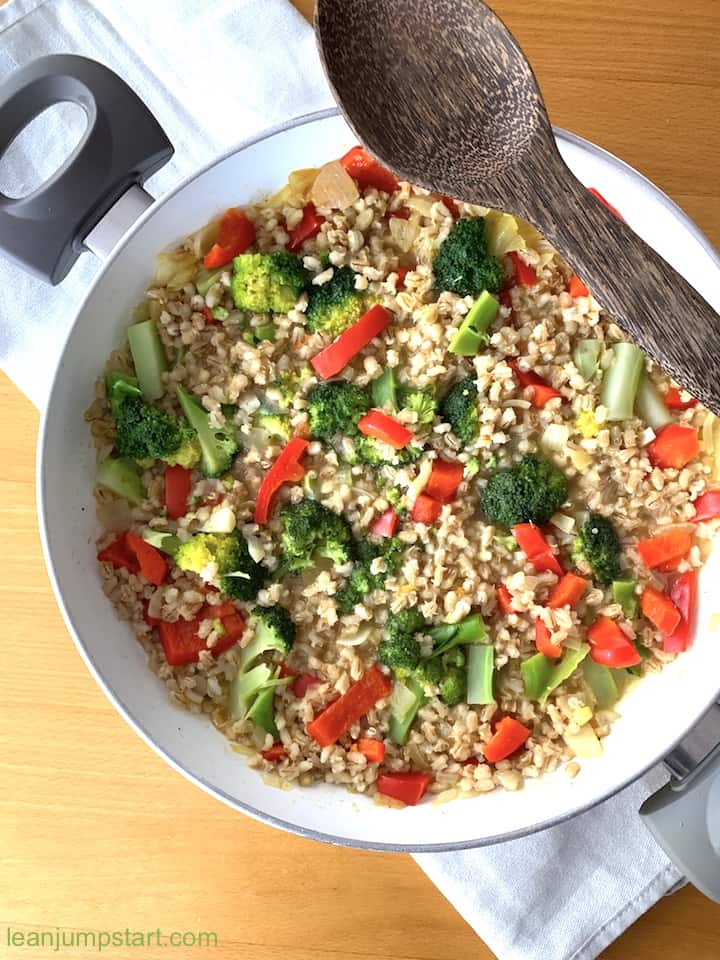 You can save some time by using the less nutrient-dense but still healthy pearl barley, which can sometimes be ready within 45 minutes. Make sure to check cooking instructions on the package.  I've also used pearl barley for this recipe and was surprised to learn how this “bran-stripped” grain could still keep some significant health benefits. I'll explain it later.

The number 1 most important seasoning!

An important seasoning for this dish, in my opinion, is nutmeg. I feel that with or without nutmeg you can make or break this recipe. As it is a heat-sensitive seasoning I recommend to add nutmeg only versus the end of your cooking process. You can use ground nutmeg or take a whole nutmeg which you then grate finely with a micro planer, a specialized nutmeg grinder or the smallest holes of a standard cheese grater.

If you are an “all eater” you can sprinkle some Parmesan cheese over this one pot meal.

The so-called “holy grain” used to be a staple. Then it was forgotten for a long time. But researchers have now rediscovered this useful grain. And they found something amazing: It protects the intestines and lowers cholesterol levels.

The intestinal flora with its bacteria plays a decisive role in the preservation of health. For example, it can prevent pathogens ingested through food from entering into the bloodstream via the intestines.

A healthy intestinal flora also protects against irritable bowel syndrome, allergies and has a positive effect on the mood. Poor nutrition however or taking antibiotics can easily upset the balance of intestinal bacteria.

In such a case you should try barley: It contains the so-called “beta-glucan”. This dietary fiber serves intestinal bacteria as food.

In an experiment, Italian researchers let study participants eat 100 grams of a barley-pasta for two months daily. At the end of the experiment, the number of useful intestinal bacteria had increased among the participants. What is more, the number of harmful bacteria decreased significantly. Positive side effect: The cholesterol level also dropped.

Click through to learn what else high fiber foods can do for you. 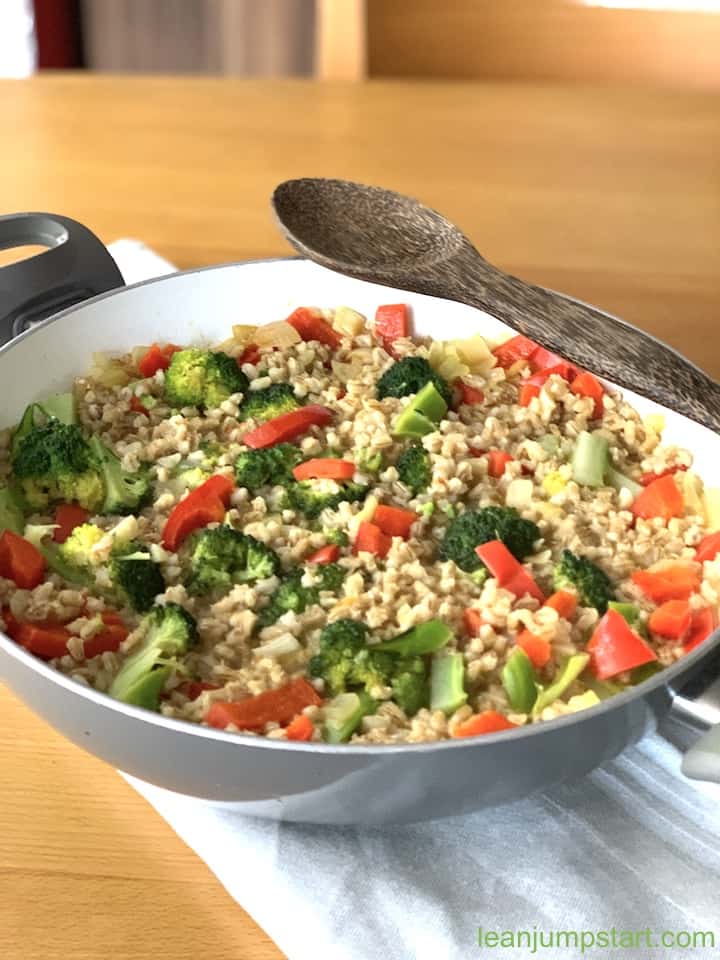 Whole grain barley is surrounded by a protective coating known as husks. Since grains and husks are fused together, the cereals contain a high proportion of cellulose. This is typically between eight and 15 percent. Cellulose belongs to the dietary fibers and is therefore indigestible.

It is particularly rich in magnesium, potassium, calcium, iron, and phosphorus. This fiber-rich grain also contains many essential amino acids.

Besides the whole grain or hulled barley, you can purchase also pot barley and as mentioned the most popular “pearl barley”. As the name suggests pearl barley goes through extra rounds of pearling which removes the hull and the bran layer. Pot barley has still most of the bran intact as it has been processed for a shorter amount of time.

Why all types are healthy

Good news for those of us who prefer grains with shorter cooking time. No matter which grain you choose, rest assured that it is always beneficial for your health.

Pearl, pot or whole grain are all included in the Health Canada adopted claim. This claim concludes that scientific evidence exists regarding a relationship between the intake of three grams of barley beta-glucan daily and lower cholesterol levels, keeping your heart healthy.

So maybe you ask, how can a “bran stripped”pearl barley still contain beta-glucan?

Evidence-based answer: While in some other grains, the fiber is only found in the outer bran layer, the Beta-glucan soluble fiber is found throughout the entire barley kernel.

Besides this risotto, there are many other ways to increase fiber in your diet. Here are 3 suggestions: